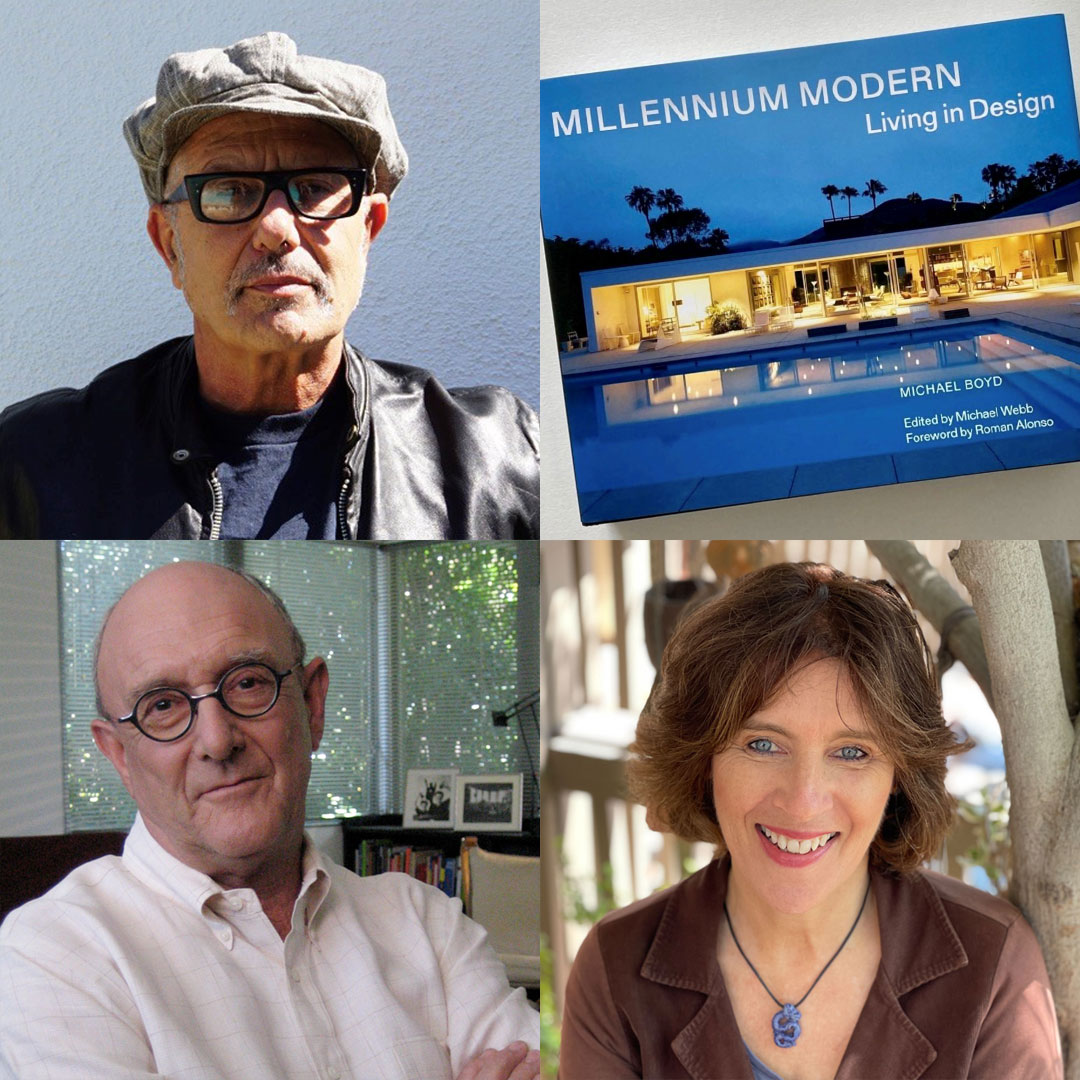 Free
On Wednesday, November 16th from 6:30 – 8:30 PM, please join us for a lively conversation with Michael Boyd and Michael Webb on the launch of Boyd’s new book MILLENNIUM MODERN Living in Design (Lund Humphries, 2022) moderated by architecture journalist Frances Anderton and in partnership with the Wende Museum.

Michael Boyd lives by Le Corbusier’s mantra: “To be modern is not a fashion, it is a state. It is necessary to understand history, and he who understands history knows how to find continuity between that which was, that which is, and that which will be.”

A design connoisseur, successful musician, preservationist, passionate tastemaker, and furniture and rug designer, Boyd believes modernism is a model for new and future design solutions. Boyd’s new book MILLENNIUM MODERN Living in Design (Lund Humphries, 2022) illustrates his holistic design practice and reflects his belief that the tenets of Modernism—honesty and simplicity—developed more than century ago, are still relevant to our pluralistic age. In contrast to those who have wanted to do away with the past, Boyd’s creations and designs are deeply rooted in the history of design.

Originally a film music composer, Michael Boyd is a major collector and curator of modernist design based in Los Angeles, who has evolved into becoming a successful artist and designer of contemporary modernist homes, furniture and landscapes.

Michael Webb Hon. AIA/LA has authored 30 books on architecture and design, most recently Architects’ Houses and Building Community: New Apartment Architecture, as well as a memoir, Moving Around: A Lifetime of Wandering, while editing and contributing essays to a score of monographs. He is also a regular contributor to leading journals in the United States, Asia and Europe. Growing up in London, he was an editor at The Times and Country Life, before moving to the U.S., where he directed film programs for the American Film Institute through the 1970s and curated a Smithsonian exhibition on the history of the American cinema. He now lives in Los Angeles in the Richard Neutra apartment that was once home to Charles and Ray Eames.

In an excerpt taken from Michael Webb’s introduction to MILLENNIUM MODERN:

“An autodidact with strong opinions, Michael Boyd has immersed himself in the history and creativity of modernism. His faith in the fundamentals is unflinching, as is his certainty in a revisionist age. “Modernism is a philosophical approach based on rationality and reality,” he declares. “It grew out of the visual chaos of the 19th century in a quest for honesty, simplicity, and truth in materials.” He shares the idealistic vision of the pioneers and has stayed true to their principles in his own work even as modernism has evolved from a narrow torrent into a broad stream with many tributaries.”

Frances Anderton covers Los Angeles design and architecture in print, podcasts, exhibitions, and public events. She is the author of Common Ground: Multifamily Housing in Los Angeles, just published by Angel City Press. For many years, Anderton hosted DnA: Design and Architecture, broadcast on KCRW, a public radio station. Her honors include the Esther McCoy Award, bestowed by the USC Architectural Guild at USC School of Architecture, for her work in educating the public about architecture and urbanism.

The Wende is an art museum, cultural center, and archive of the Cold War that explores social, political, and cultural change. The Wende reaches beyond the conventional walls of a museum in pursuit of international scholarship, artistic interpretation, community engagement, digital access, and experimental public programming.