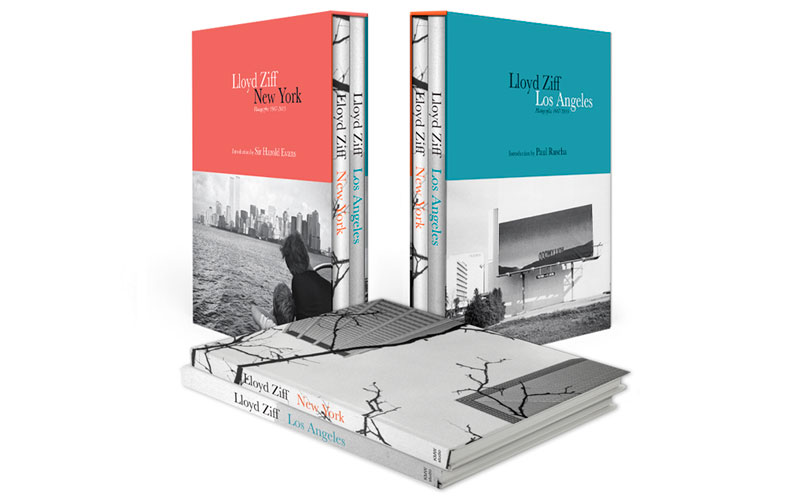 On Thursday, October 13th from 5 to 7PM, please join Arcana: Books on the Arts and KMWstudio for an L.A.-centric conversation between Paul Ruscha and photographer Lloyd Ziff to celebrate the publication of the lovely New York / Los Angeles, Photographs: 1967-2015. The discussion will be followed by a book signing.

New York / Los Angeles, Photographs: 1967-2015 is a remarkable collection of compelling images of life in two of America’s most exciting cities, as seen through the eye of photographer Lloyd Ziff. This lovely two volume set – newly published by KMWstudio – encompasses more than forty years of black and white and color photography. As both cities change before Ziff’s inquiring lens, his unique vision emerges, amused and ironic, finding beauty and surprise in daily urban life.

About Lloyd Ziff
Since 2000, Ziff has made photography the focus of his career. He has had one man shows at New York’s Danziger Gallery and Earl McGrath Gallery in Los Angeles. His photographs have been included in Patti Smith’s autobiography, Just Kids, and The Spirit of Family by Al and Tipper Gore as well as in Blind Spot, Interview, Kid’s Wear (Germany), New York, Rolling Stone, and The New York Times Magazine. Ziff’s work is included in the permanent collections of The Los Angeles County Museum of Art, The Palm Springs Art Museum, and The International Center of Photography. In 1999, he was elected to the Board of Trustees of Pratt Institute in Brooklyn, New York, his alma mater.

About Paul Ruscha
Paul Ruscha is a photographer, calligrapher, and sometimes a writer. His book, Full Moon, published by Steidl, is an eclectic overview of his personal art collection and of the artists he collects. In 1973, after thirty years as a native of Oklahoma City, he moved to Los Angeles to work for his brother, Edward, where he presently documents all of his studio’s artistic production. He met Lloyd Ziff in L.A. in 1973 and they have been close friends ever since.