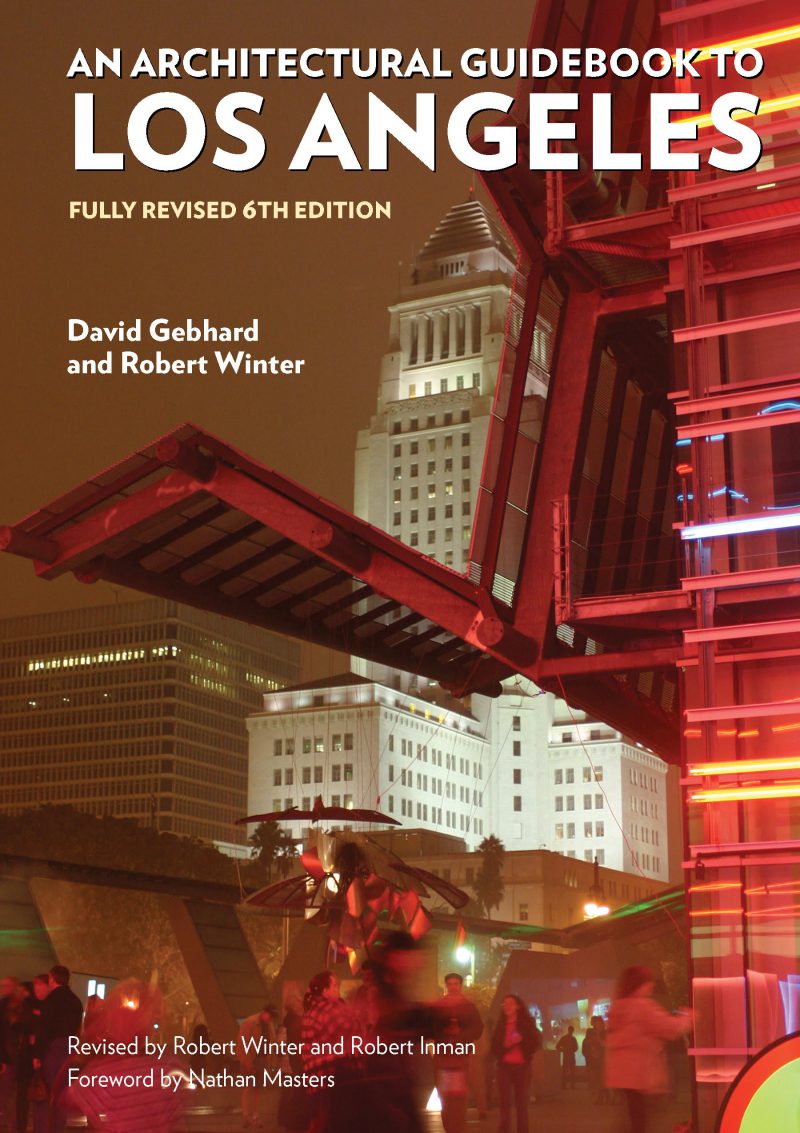 On Tuesday, March 26, from 7 to 9 pm, please join us for a conversation with Robert Inman in celebration of the (re)launch of The Architectural Guidebook to Los Angeles.

Since its first publication by the Los Angeles County Museum of Art in 1965, this seminal vade mecum of Los Angeles architecture has explored every rich potency of the often relentless, but sometimes—as the authors have captured here—relenting L.A. cityscape. Revised extensively and updated rigorously since its fifth edition published in 2003, The Architectural Guidebook to Los Angeles now contains ninety-six sections organized in thirteen geographic chapters, boasting over 200 new additions to over thousands of entries cataloging every crease of Los Angeles County’s metropolitan sheath.

Originally written by leading architectural historians Robert Winter—described by Los Angeles Magazine as both the “spiritual godfather” and “father” of L.A. architecture—and the late, great David Gebhard, the guide has been revised and edited for a sixth edition by award-winning L.A. urban walker and Winter’s trusted collaborator Robert Inman. Nathan Masters, historian and Emmy-award-winning host, producer, and managing editor of KCET’s Lost LA , writes the foreword.

The Architectural Guidebook to Los Angeles, hailed by many as the built L.A. opus, explores the manmade structures, gardens, parks, and other physical features of a fulgurous Los Angeles. With singular wit and brio, the authors artfully steward readers through all regions and styles, from the Spanish Mexican Period to Postmodern, American Take-over to High Tech, and Beaux-Arts to Craftsman. Sites covered begin with the missions of Spanish California and end with projects completed in 2017.

Dr. Robert W. Winter (1924–2019)Lauded as a “Guru,” “Father,” and “Godfather” of Los Angeles architecture, Dr. Robert W. Winter was a renowned historian of fabricated California. Born in Indianapolis, Indiana in 1924, Winter received his doctorate from Johns Hopkins University and went on to teach at Dartmouth College, then UCLA, before spending thirty-one years as the Arthur G. Coons Professor of the History of Ideas at Occidental College, where he retired in 1994. In addition to his seminal work, An Architectural Guidebook to Los Angeles, written initially with David Gebhard in 1965 and now in its sixth edition, Winter’s most notable books include, Craftsman Style (2004) and The California Bungalow (1980).

Dr. David Gebhard (1927–1996) was a preeminent architectural historian and preservationist. After a long career teaching at UC Santa Barbara, he is remembered through his many written contributions to both the field writ large and his preservation efforts in both Santa Barbara and Pasadena.

Robert Inman is the author of A Guide to the Stairways of Los Angeles (2008) and Finding Los Angeles by Foot: Stairstreet, Bridge, Pathway, and Lane (2013). A native son of Los Angeles, he is an award-winning urban walker and frequent collaborator of his mentor, Dr. Robert W. Winter.