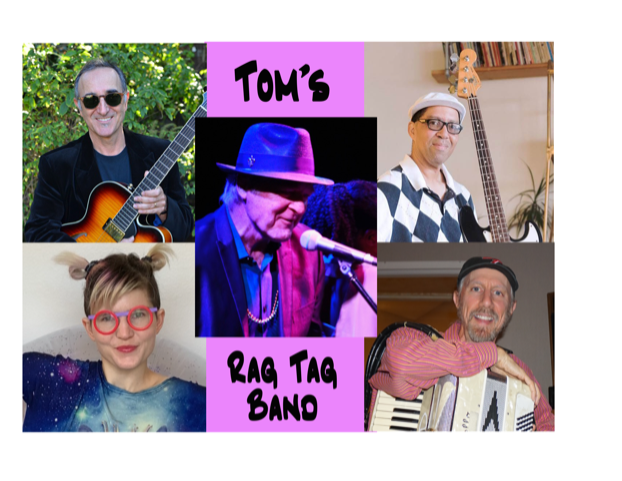 On Friday and Saturday evenings from 5:00 to 7:00 PM during the month of September, please join us for a little Al Fresco Music on Helms Avenue. While we are not encouraging large gatherings, we hope you stop by, grab a table at one of our restaurants, and enjoy some socially-distanced dinner music with a selection of talented, local musicians.

Tom’s Rag Tag Band came out of a bunch of professional musician friends who just wanted to do some playing during the Pandemic of 2020. So they got together in a backyard, put on their masks, took out their instruments and started playing some classic and original tunes. Pretty soon neighbors starting coming to listen with chairs, masks, dogs and drinks. Now it’s a regular thing!

Tom Nolan is a musician, bandleader, teacher, and actor. He has been leading the Tom Nolan Band for over thirty years. The band has played up and down California, and has produced 8 CDs. Tom is honored to be in the Rag Tag Band, and loves playing music in his driveway.

Dan Radlauer has composed for TV and Film for decades. His music has been on every major network and inhabited continent. Dan plays many instruments, including the accordion. (unfortunately)

Guitarist Jory Schulman earned a Bachelor of Music from Berklee College in Boston, and a Master’s degree in guitar from the University of Southern California. He is an associate professor at Santa Monica College.

David Brown, bass guitarist, has played locally & globally since the 20th Century. Artists include Peaches & Herb, Heatwave and the Manhattans.