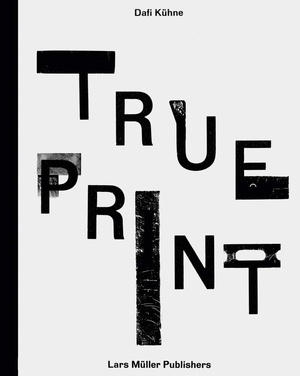 On Saturday, March 2nd from 4 to 6 pm, please join Arcana: Books on the Arts for a meet, greet, and book signing with master graphic designer, Dafi Kühne, in conversation with Lars Müller and Gloria Kondrup.

Dafi Kühne is a Swiss designer who works with analog and digital ways to produce fresh and unique letterpress-printed posters. Using very different kinds of instruments – from a MacBook to a pantograph – for his compositions, he pushes the boundaries of design. Never afraid of getting his hands dirty in his creative workshop, Kühne embraces the labor involved in the entire process of creating a poster from initial idea to finished product. Fusing modern means with the centuries-old tradition of the letterpress, he forms a new vocabulary on how to communicate through type and form in a truly un-nostalgic way. Never retro, his work is a clever response to the search for new ways of graphic expression: true print. True Print is also the title of his first comprehensive monograph published by Lars Müller.

Dafi Kühne (*1982) is a graphic designer. He studied Visual Communication at Zurich University of the Arts and owns a design and letterpress printing studio named babyinktwice. He was included in Print magazine’s 20 under 30 list in 2012.

Lars Müller, born in Oslo in 1955 and a Norwegian citizen, has been based in Switzerland since 1963. After becoming a graphic designer in Zurich, extended travels, and a one-year assistant position with designer Wim Crouwel in Amsterdam, Müller established his studio in Baden / Switzerland in 1982. In 1983 he published his first book and, as Lars Müller Publishers, has produced some six hundred titles to date. Müller is a passionate educator and has taught at various universities in Switzerland and in Europe, frequently serves on academic and competition juries, and is currently a member of the steering board of Design Preis Schweiz. From 2013 to 2015, Müller was the international president of AGI – Alliance Graphique Internationale.

Gloria Kondrup is a full-time professor as well as the Executive Director of the Hoffmitz Milken Center for Typography at Art Center College of Design. As the Director of Archetype Press – ArtCenter’s unique and vibrant letterpress studio – she redefines the value of typography and analog technology in the digital landscape. Her fine art printworks and books span both fields of art and design, and are in private and public collections including AIGA, The Getty, and the Sackner Archive of Concrete and Visual Poetry. As a design consultant to national and international firms she has helped evolve extensive branding, identity, and packaging systems for clients including Aon, Avon, and Goodwill Industries.