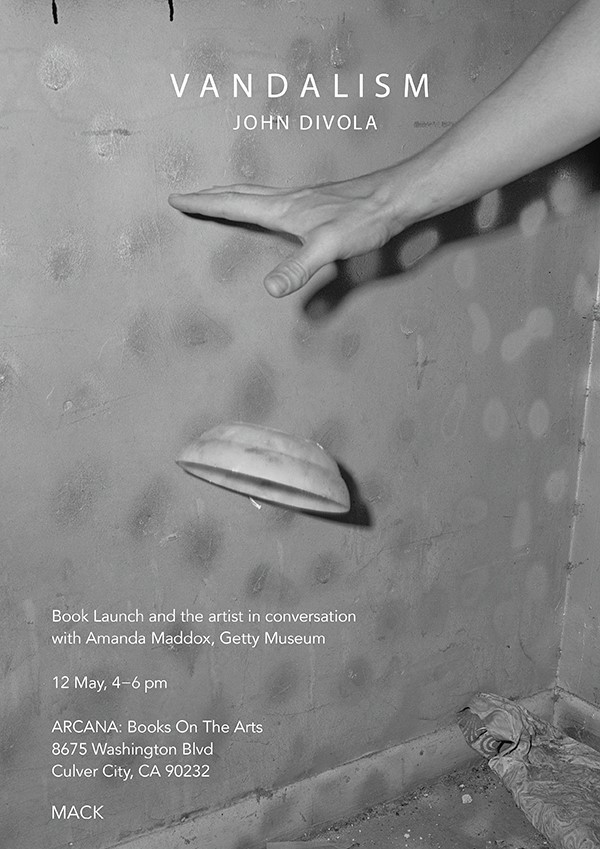 On Saturday, May 12th between 4:00 and 6:00 PM, please join Arcana: Books on the Arts for a conversation between John Divola and The Getty Museum Department of Photographs curator Amanda Maddox followed by a book signing of his stunning new MACK publication.

Between 1974 and 1975, American photographer John Divola – then in his mid-twenties and without a studio of his own – traveled across Los Angeles in search of dilapidated properties in which to make photographs. Armed with a camera, spray paint, string, and cardboard, the artist would produce one of his most significant photographic projects entitled Vandalism.

To produce this visceral black and white series of images Divola vandalized vacant homes with abstract constellations of graffiti-like marks, ritualistic configurations of string hooked to pins, and torn arrangements of card, before photographing the results. The project vigorously merged the documentary approach of forensic photography with staged interventions echoing sculpture, performance, and installation art. Serving as a conceptual sabotaging of the delineations between such documentary and artistic practices at a time when the ‘truthfulness’ of photography was being called into question, Vandalism helped to establish Divola’s highly distinctive photographic language.