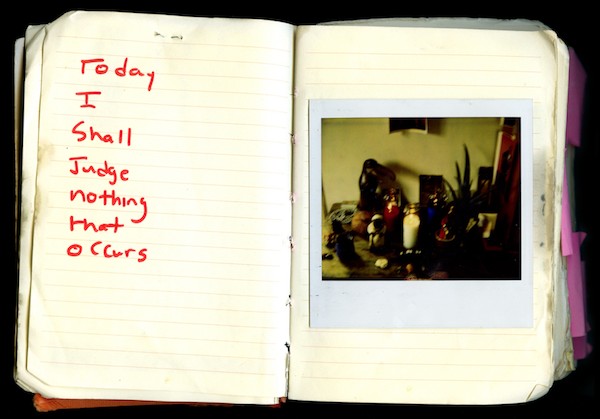 On Saturday, January 27th between 4:00 and 6:00pm, please join Arcana: Books on the Arts to celebrate Lyle Ashton Harris’ new Aperture monograph Today I Shall Judge Nothing That Occurs, along with a lively and engaging presentation with guests Walead Beshty, Charles Gaines, and Amelia Jones.

Throughout the late 1980s and early 1990s, a radical cultural scene emerged across the globe, finding expression in the galleries, nightclubs, and bedrooms of New York, London, Los Angeles, and Rome. In Lyle Ashton Harris: Today I Shall Judge Nothing That Occurs, the artist’s archive of 35mm Ektachrome images are presented alongside journal entries and recollections by additional contributors coalescing in a presentation of what Harris has described as “ephemeral moments and emblematic figures… against a backdrop of seismic shifts in the art world, the emergence of multiculturalism, the second wave of AIDS activism, and incipient globalization.” The Ektachrome Archive “constructs collective and private narratives to comment on identity, desire, sexuality, and loss” and was included in the 2017 Whitney Biennial.

About the Panelists
Born in the Bronx in 1965, Lyle Ashton Harris received his MFA from the California Institute of the Arts, and attended the Whitney Museum of American Art Independent Studies Program. His work has been exhibited worldwide including at the Whitney Museum, Solomon R. Guggenheim Museum, 52nd Venice Biennial, and São Paulo Biennial. He currently is an associate professor of art at New York University, and is represented by New York’s Salon 94.

Born in London in 1976, Walead Beshty is a Los Angeles-based artist and writer. Beshty was an Associate Professor in the Graduate Art Department at Art Center College of Design, Pasadena, and has taught at numerous schools including UCLA, UC Irvine, CalArts, the School of the Art Institute of Chicago, and the MFA Program at Bard College. He is renowned for his unique conceptual approach to photography and sculpture and emphasis on the conditions of the production and circulation of images and artworks.

Charles Gaines received his MFA from the Rochester Institute of Technology in 1967. In 2013 he received a John Simon Guggenheim Memorial Foundation Fellowship and presented the critically acclaimed solo exhibition Notes on Social Justice at Paula Cooper Gallery, New York. In 2012, Gaines was the subject of a mid-career survey at the Pomona College Museum of Art and the Pitzer College Art Gallery in Claremont, California. His works are in the collections of the Museum of Contemporary Art, Los Angeles, Hammer Museum, Los Angeles County Museum of Art, Museum of Modern Art, New York, and Whitney Museum of American Art. He has been a full-time faculty member of the School of Art at CalArts since 1989. He currently resides in Los Angeles, and is represented by Susanne Vielmetter Los Angeles Projects and Paula Cooper Gallery.

Amelia Jones is the Robert A. Day Professor in Art and Design and Vice-Dean of Critical Studies at USC’s Roski School of Art and Design. Trained in art history, film theory, and performance studies, and widely read in philosophy and identity theory, Jones is known for her work elaborating a queer, anti-racist, feminist history and theory of modern and contemporary Euro-American visual arts.