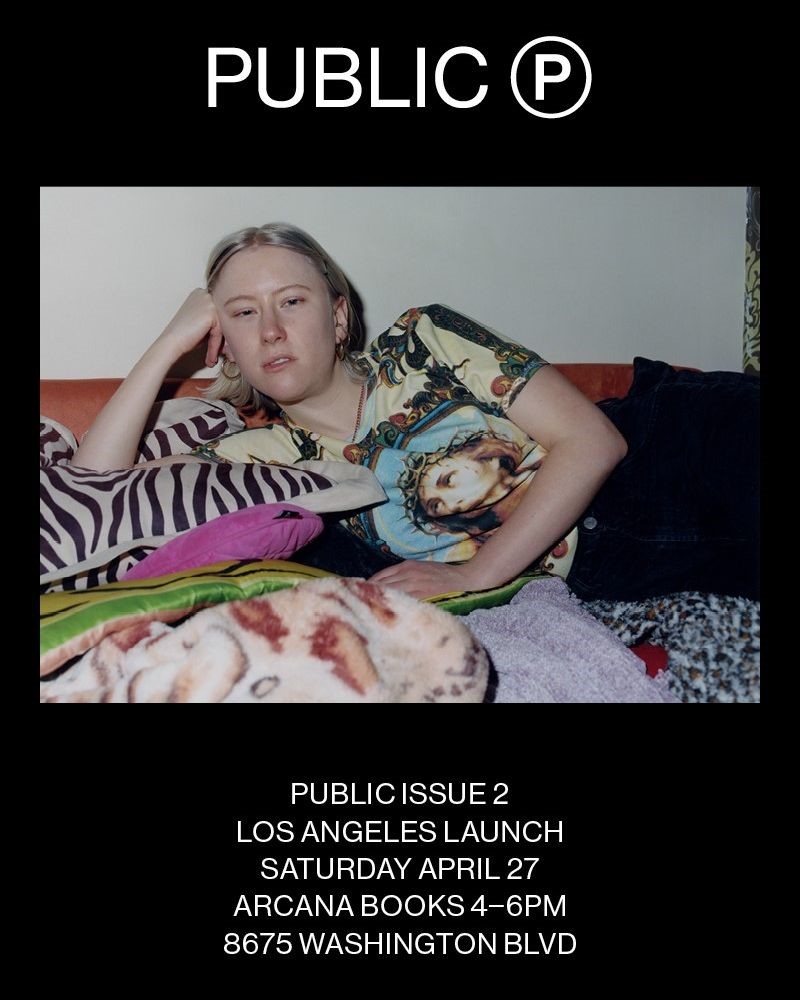 Free
On Saturday, April 27th between 4:00 and 6:00 PM, please stop by Arcana: Books on the Arts to celebrate the West Coast launch of the latest installment of Creative Director Alexander McWhirter’s thematic annual art and fashion journal, Public.

Presented in a distinctive large-format with three different cover options, the highly-anticipated new issue tackles the challenge “We Must Take Action”. Public 2 features seven subjects photographed by Camille Vivier, Jack Webb, Eileen Cowin, Thomas Giddings, Aleksandra Zagozda, Moises Saman, and Rachel Lamb, with styling by Delphine Danhier, Eliza Conlon, and Shibon Kennedy. Notes McWhirter: “The obvious is all around us. It is a void in which everything has been fine-tuned to such an extent that indistinctiveness prevails. “Cool” has become inoffensive and predictable, and taste is easy to place a pulse on. Public breaks this pattern of democratized cool, bringing together a body of work that covers a unique perspective on subjects in life.”

Originally from London, Alexander McWhirter began his career in New York as the Art Director at V Magazine before founding McWhirter Studio. His projects focus on working closely with distinctive collaborators to present a narrative that observes human interaction, be that with our environment or with each other. The story is woven together with elements from art and fashion, the resulting idea is unmistakable and inclusive to all. He has collaborated with Visionaire, Suzanne Geiss Gallery, Cultural Traffic, and Calvin Klein, where he worked closely with Raf Simons and Pieter Mulier on 2017 campaigns for Calvin Klein Jeans, Underwear, and the 205W39NYC RTW Collection Book.