On Saturday, June 18th from 5 to 7pm, please join Arcana: Books on the Arts for a double book signing for these two amazing releases, Deanna Templeton’s The Swimming Pool and Clint Woodside’s Undercover Cars.

Deanna Templeton’s The Swimming Pool is a newly published photographic essay from this Southern California-based artist. Departing from her well-known street portraiture, this collection offers a deep and inspiring view of the human form underwater. The series was born after an impromptu nude swimming pool shoot of her husband – the artist Ed Templeton – which spurred an eight-year journey in the study of light, expression, and the enigma of water. Shooting entirely on color, black-and-white, and Polaroid film, Templeton sends her friends into the pool to be photographed in their truest form. 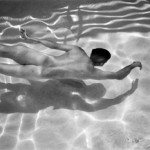 Clint Woodside’s Undercover Cars was first issued in 2013 as a Deadbeat Club zine and has been newly re-conceived and substantially enlarged as an elegant hardcover book. Containing fifty-two images of cars parked in plain sight, but covered from the elements, it is the culmination of a series of color photographs – shot on film and printed in the dark room – spanning five years, scores of autos, and thousands of miles from Los Angeles to Banghok. 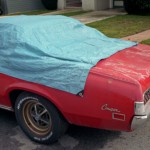