Free
Join us on Thursday, September 29th from 6:30 to 8:30 pm for a conversation and book signing with Joseph Giovannini and architectural journalist Frances Anderton about the new authoritative history of the Avant-Garde architecture of our times.

Architecture Unbound: A Century of the Disruptive Avant-Garde (Rizzoli), by noted critic and designer Joseph Giovannini, has been called “an amazing achievement,” “a masterpiece,” and “an instant classic.” The book chronicles the century-long influence of avant-garde art and the theories of the oblique on prominent architects and some of their highest-profile projects—many of which are in Los Angeles. Don’t miss this lively discussion of architecture that is transgressive, oblique, aberrant, deconstructed, and digital.

Arcana: Books on the Arts will be at the event selling books. 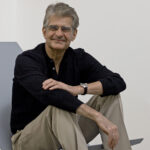 Joseph Giovannini, author of Architecture Unbound: A Century of the Disruptive Avant-Garde, is a practicing designer who has written on architecture and design for such publications as the New York Times, Architectural Record, Art in America, and Art Forum, and was architecture critic for New York Magazine, Los Angeles Herald Examiner, and Los Angeles Review of Books. He has also taught widely in graduate architecture programs. 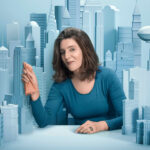 Frances Anderton covers Los Angeles design and architecture in print, broadcast media and public events. Her book, Common Ground: Multifamily Housing in Los Angeles, will be published in fall, 2022, by Angel City Press. Anderton also co-creates talks and events at Helms Bakery District. Recent programs included the public symposium Seeding The City; In Harmony With Nature, a show of architectural work by James Hubbell; and the 2021 exhibition Low Rise Mid Rise High Rise: Housing in LA Today. She is producing Art For Earth’s Sake, a series of conversations about the art world and its environmental footprint, to take place at MOCA in fall, 2022. For many years Anderton hosted DnA: Design and Architecture for KCRW public radio station, having got her start at KCRW producing Warren Olney’s current affairs shows Which Way, LA? and To The Point.