Join us for a Reception + Book Signing for Paperback L.A. Book 3 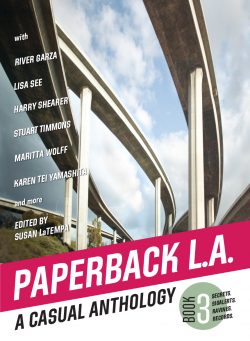 Free
On Sunday, May 5th from 4:00 to 6:00 pm, please join us for a reception and book signing to celebrate the launch of Paperback L.A. Book 3, A Casual Anthology: Secrets. SigAlerts. Ravines. Records.

Paperback L.A. Book 3 is a freewheeling, visually striking book that brings together an unusual collection of texts and photos to create what Los Angeles Magazine called a “genius” mosaic of Los Angeles, present and past. It’s the final volume of the acclaimed Paperback L.A. anthology series, which was introduced last year and has been honored by critics as among the best recent books about L.A.

Contributors include journalists, fiction writers, oral history tellers, humorists, food writers, and essayists from many different decades from 1873 to the present. Writers will present brief readings from selections of their work:

RJ Smith on a 1940s moment when Central Avenue musicians amplified awareness of a Supreme Court civil rights case, from his book The Great Black Way

Lou Mathews on the street racing scene in the late 1960s, from his novel L.A. Breakdown

River Garza on his apprenticeship as a Tongva plank-canoe paddler, from his essay for News from Native California

Rosanne Welch on how the old New Hollywood came up with The Monkees, from her article for Written By

Patricia Freeman on comparing summers in L.A. and N.Y. circa late’80s when pantyhose were an issue, from her essay for L.A. Style magazine

Copies of Paperback L.A. Books 1 & 2 will also be available, and writers and photographers from those books will be on hand for signing. The launch is co-sponsored by publisher Prospect Park Books and Liberty Hill Foundation, L.A.’s social justice foundation. Culver City Mayor Meghan Sahli-Wells and Council Member Daniel Lee will welcome attendees.