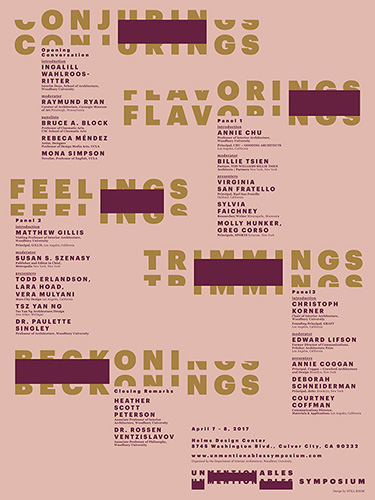 Over the past two decades, Chu+Gooding have been honing their craft toward the mastery of the interior architectural experience. They have recommitted to their roots to create thoughtful and lasting architecture for those who dwell within it. A significant milestone in this twenty-year endeavor is the Unmentionables Symposium, an inaugural 2-day event hosted by Woodbury University’s Interior Architecture Department, where founding principal Annie Chu has taught for the past six years.

Unmentionables is aimed at exploring new narratives for interior architecture and establishing a precedent for welcoming previously unmentioned ideas in spatial practice and theory. The symposium will serve as a provocation for marginalia, taboos, illicit ideas, and undertheorized issues such as critical interiority and physical and virtual constructed environments.

Unmentionables brings together a range of notable thinkers and designers drawn from literature, architecture, film, art, philosophy, and interior design. Over the 2-day period, the symposium will feature persistently critical voices from around the country.