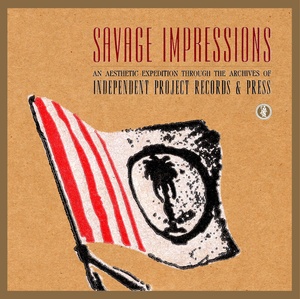 On Saturday, March 7th from 4:00 to 6:00 pm, please stop by Arcana: Books on the Arts for a very special afternoon with Bruce Licher and Karen Nielsen Licher of Independent Project Press & Records as they celebrate the release of Savage Impressions with a book signing, one-day exhibition and sale of printed matter, and a musical performance at 5:00 PM sharp by SR2.

Savage Impressions is the first extensive monograph on Bruce Licher’s Independent Project Records and Independent Project Press. With the current explosion of interest in letterpress, many are looking to see how new work can be influenced by the past. Active since 1982, Bruce Licher’s Independent Project Press is a contemporary studio that has bridged technological eras and produced an unparalleled body of work. It has culled from the past while simultaneously turning it on its head with a distinct visual vocabulary that continues to influence current aesthetics.

For the first time, a comprehensive overview of Independent Project Records and Independent Project Press has been compiled into a monograph published by P22 Type Foundry, produced in a quality that displays their  limited edition, hand-made work in over 200 pages of full color, from mechanical process work (for clients such as REM, Stereolab, and Camper Van Beethoven) to finished works of art with insights into the creative process along the way. The text includes an essay by Karen Nielsen Licher as well as material from Rudy Vanderlans’ Emigre magazine that featured the work of IPR & P. Co-designed by Bruce Licher and Jim Greishaber at P22, Savage Impressions is a 12 x 12-inch hardcover book that displays in full color the diverse range of art and design produced by Independent Project Records & Press.

This first printing is an edition of one thousand copies, with three-hundred and fifty of those being a now-sold out Deluxe Edition that includes a 12” vinyl record and other letterpress-printed ephemera. This book is a profound reminder of the value of the hand-made and how it can interface with the mass-produced. It will stand as major documentation of one of the most influential letterpress studios currently in existence.