On Saturday, November 14th from 4:00 to 7:00pm, please join Arcana: Books on the Arts for the first in a series of exciting, overlapping double-headers with two of their favorite photographers to celebrate their new publications documenting modern-day working class heroes in the United Kingdom.

In the Fall of 2010, photographer Jona Frank began to make portraits at an amateur boxing club just outside of Liverpool in a suburb called Ellesmere Port. All the boys tried to act tough for the camera, and Frank was reminded of a line from the Arcade Fire song Rococo: “They seem wild, but they are so tame”. In the song they are singing about going downtown and watching the modern kids. It made Frank think about how these boys, in this town, are in their life. For them, everything is present. This is their 21st Century, their right now, but their faces evoke the past. Some people might confuse the realism of Jona’s work with a certain anti-romanticism. But she’s just bending the ideal by holding true to the photographer’s mantra “keep your eyes open and be true to your heart“.

By the late 1980s England had experienced ten years of Conservative government, the collapse of industry, the rise in poverty and unemployment, and centralized government’s abandonment of people and place. It is in this context that British photographer Nick Waplington spent four years documenting the daily lives of two working-class families on a council estate in Nottingham, England. Rather than embracing the contemporary photographic conventions of social realism, Waplington chronicled the lives of these families in saturated color, capturing an intimate narrative with poignancy and an unexpected humor.

Nick Waplington makes no dramatic social statements, but rather a quite touching (matter-of-fact) chronicle of the daily struggle of the working-class. “Living Room is tender and poignant, wonderfully documenting the physical and physiological dysfunctionality of families enduring the plight of economic deficiency”. 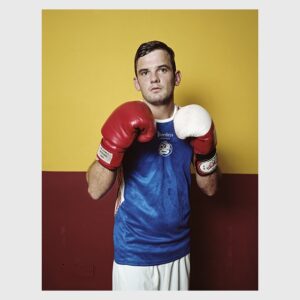