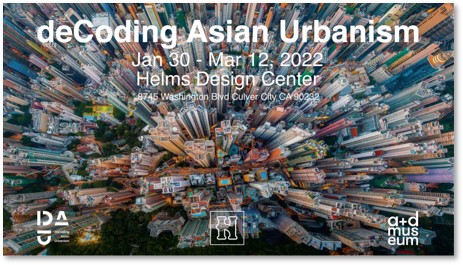 Register for the discussion, as seating is limited.

deCoding Asian Urbanism is a timely book and exhibition about the unprecedented, meteoric growth of Asian cities, and the “urban acupuncture” projects that are making them more liveable. This Thursday, March 3, Helms invites you for a reception and conversation about the issues raised by DAU. What happens to cultural identity in the face of such extreme change and what can designers do to recreate a sense of place? Does the extreme density of Asian cities represent the future for all growing cities?

While there, visitors can tour the DAU exhibition. Ameen, designer Caglar Gokbulut, filmmaker Miriam Kuhlmann, Swinerton construction and other talents have transformed a showroom at the design center at Helms Bakery District into a maze of tight spaces, containing vivid photographs, visualizations of stunning population growth data, kaleidoscopic films of Dhaka, Bangladesh, Hong Kong and Tokyo by Kuhlmann, as well as moments of respite from the chaos in depictions of ancient culture and in new developments aimed at reconnecting residents to cultural touchpoints and to nature.

The exhibition’s relevancy is expansive. By exploring this exponential growth and its impact worldwide, deCoding Asian Urbanism seeks to stimulate a dialogue between policymakers, designers, and public officials shaping cities in today’s multilayered paradigm.
A book signing will follow the discussion.

Speakers
Farooq Ameen is the founding principal of City Design Studio, an architecture and urban design practice based in Los Angeles, with projects in Asia, Europe and the US. He has held academic appointments at SCI-Arc (LA /Lugano) and Cal Poly among others. Ameen is a Board Member at the A+D Architecture and Design Museum and the Council for Open Building. He received a Master of Architecture from UCLA. He is co-curator of the DAU exhibition and the related publication with Kenneth Frampton and Ken Yeang.

Kulapat Yantrasast is a thought-leader in the fields of architecture, art, and sustainable design. Originally from Thailand and now based in Los Angeles and New York, he is the founding partner and Creative Director of WHY, a multidisciplinary design practice. WHY, an AD100 Firm since 2019, has engaged in major museum projects including the Rockefeller Wing of The Metropolitan Museum of Art, New York, the expansion of the Asian Art Museum in San Francisco, and the new Academy Museum of Motion Pictures in Los Angeles. In 2009, Yantrasast received the Silpathorn Award for Design from Thailand’s Ministry of Culture for outstanding achievement and notable contributions to Thai contemporary arts and culture.

Astrid Haryati is an architect, planner and the founder of TERRA LUMEN, an architecture studio based in Jakarta, Bandung, and Beverly Hills with a focus on placemaking in urban and natural settings. She previously served as deputy on sustainable strategies for the Mayors of Chicago and San Francisco and as deputy on public policy for Indonesia’s Minister of Trade. Her commercial and non-profit initiatives include award-winning nationwide and community-based projects in the US, Indonesia, and Turkey among others such as for sea turtle beach communities in the coral triangle region and Indonesia’s informal STEAM education.

The DAU project’s decade-long effort and research are memorialized in an accompanying 458-page publication that includes the work of prominent sociologists, architects, historians, urban designers, and activists from across the globe, each providing a unique perspective on the complexity of the contemporary city. Extensively illustrated with project images, analytical diagrams, maps, and selected photographs, it includes excerpts of spirited panel discussions from a symposium at Harvard University.

The project is curated by British historian Professor Kenneth Frampton, Malaysian ecologist and architect Ken Yeang, and Los Angeles-based urban designer Farooq Ameen. It builds on multi-year collaborations with the Art Center College of Design, the Bengal Foundation, and Harvard University. The exhibition is made possible by the very generous support of Walter N. Marks, Inc. and the Helms Bakery District. A+D is also indebted to Swinerton Builders, Crisp Imaging, City Design Studio, Francis Krahe & Associates, S2N Technology Group, and others who partnered with the institution to realize the show’s installation.

If you are unable to join us for the discussion, please register for tickets to see the exhibition before it closes on March 12th.

Let’s all stay safe! Proof of vaccination will be required to enter the exhibition. Thank you for helping us to continue hosting in-person events.